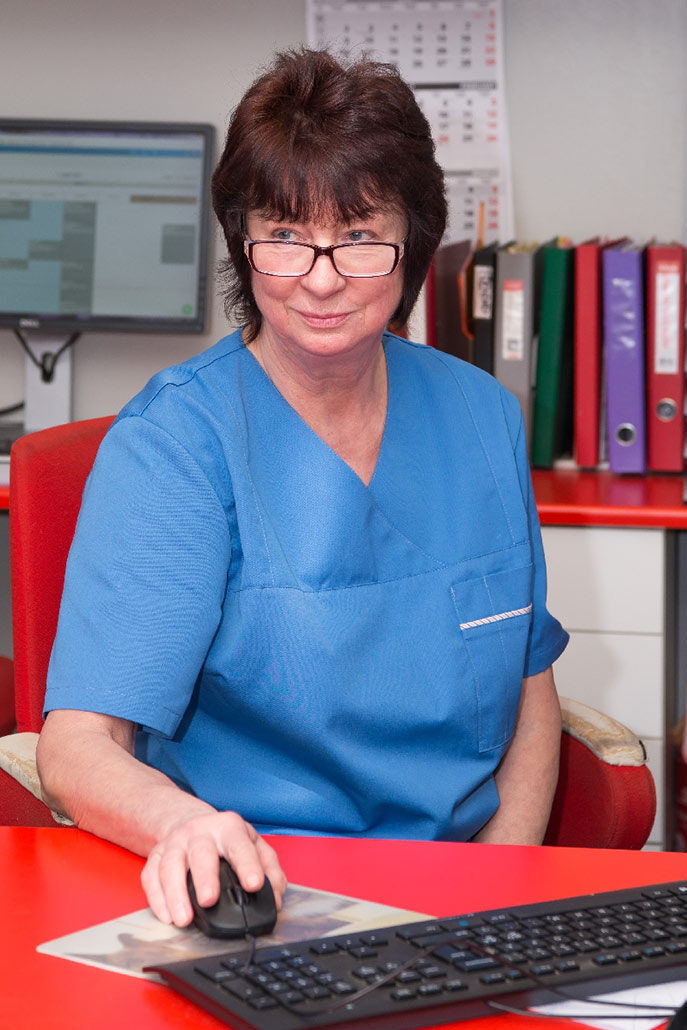 Anne is an experienced dog owner, she can give advice regarding nutrition, behaviour and pet care. Consistent continuing education helps her to keep up to date with new products. Anne is in charge of ordering and managing the medicine, food and pet care products of the clinic.

As a little girl, Anne used to spend all her allowance on treats for local dogs, she even tried to train them. At the age of 11, she got her first dog – a big black mix. 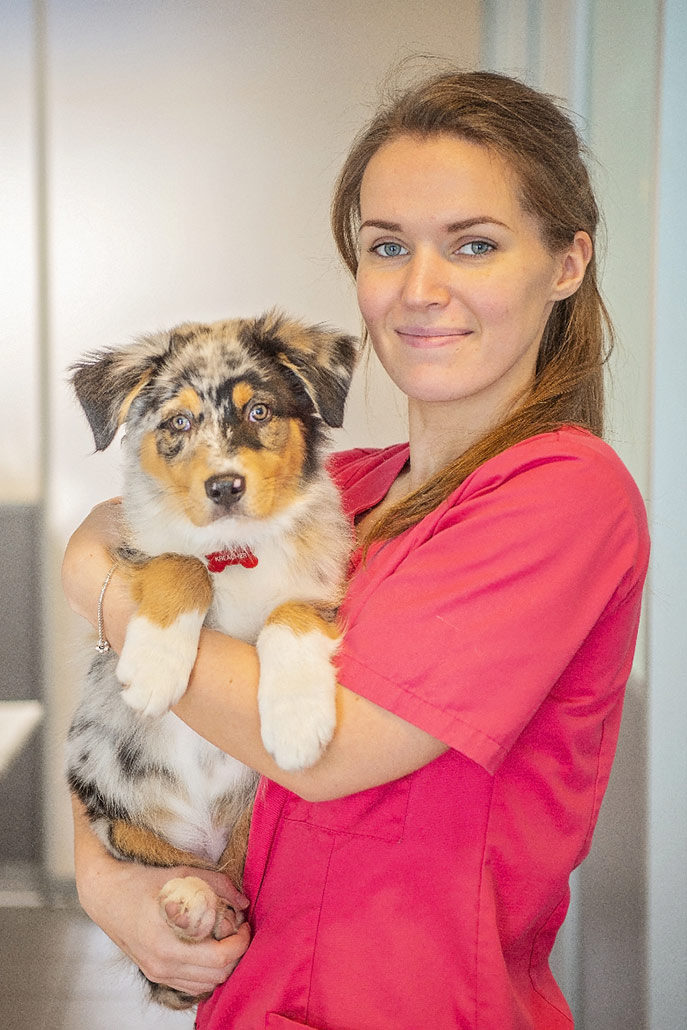 Eva is a city girl, who spent her summers in the country and has had contact with all kinds of animals. At home her family always had cats. Either taken from the shelter or otherwise saved. At one point they also had a guinea pig and a dog.

After finishing high-school, Eva realized, that she would like a vocation that would have something to do with animals. At that time, veterinary assistants were already educated in Särevere at the Järvamaa Vocational Education Centre. Eva began her studies in the fall on 2016 and graduated in the winter of 2018. Eva already had a job in our clinic at that time, because she had shown great interest and dedication to the work of a veterinarian’s assistant when she came to us for her summer trainee practice. Eva is a universal assistant in the regard that she can manage both the work in the back, where she must deal with animals and veterinary medicine more, and the work at the reception, which requires more of customer relations, knowledge of merchandise and readiness to answer questions on the phone.

During her free time, Eva likes to ride a dirt bike, hike and read. She has two cats Surru and Mugri, whom she adopted from the shelter.

At the moment, Eva is on maternity leave. 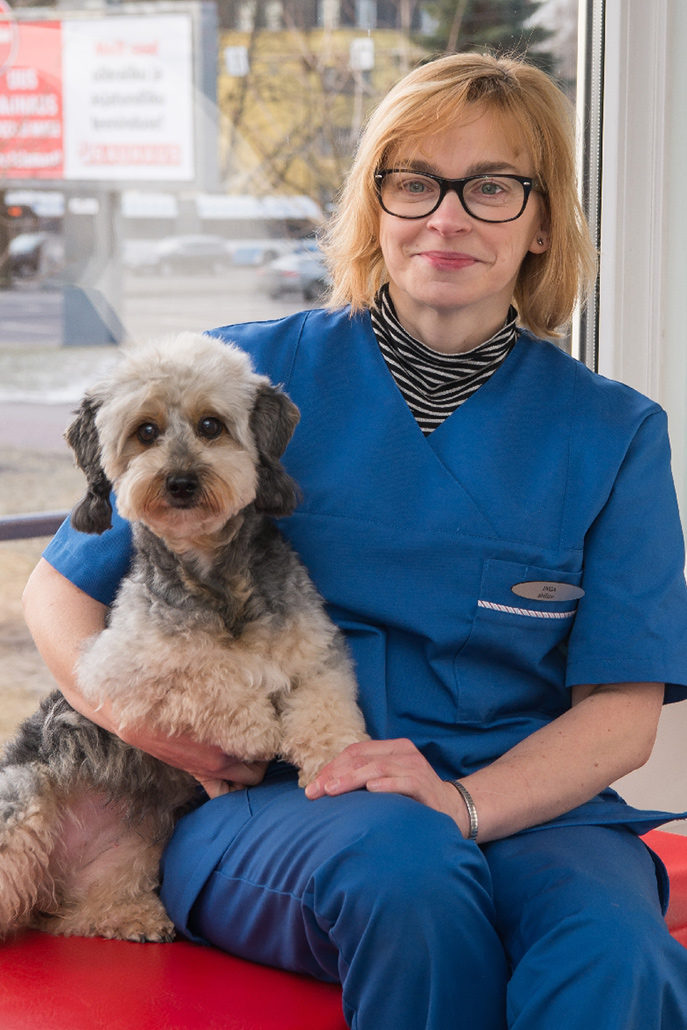 After working at the National Veterinary Laboratory for 9 years, Inga came to our clinic in 2000. She takes care of all the laboratory work and assists on operations or monitors anesthesia. Inga has trained a big part of the vets and assistants in our clinic. Eager young trainees always followed Inga around, who time and time again had the patience to give them practical lessons about the things they learned in school. By now, Dr. Triin Kass and assistants Eva and Teddy have taken over managing the assistants, but Inga is always there in the background if the situation might turn out to be more complicated than expected at first.

Inga has attended many continuing education events in Estonia and Finland. In 2011 she had the opportunity to attend the BSAVA congress in Birmingham. In 2018 Inga received the honorary title of „Best Veterinary Assistant” from the Estonian Veterinary Assistants Association.

Throughout the years Inga has given a home to many different pets. Often lost or abandoned animals find their way into her home. For example, the guinea pigs she took in on temporary care and who just stayed and a parrot. Now Inga says: „With my daughter growing older, the animals farm we have has started growing smaller. At the moment we have dogs Elsa-Berta and Otto and cat Nupsik.”

Ingas hobbies include line-dancing and handicrafts. 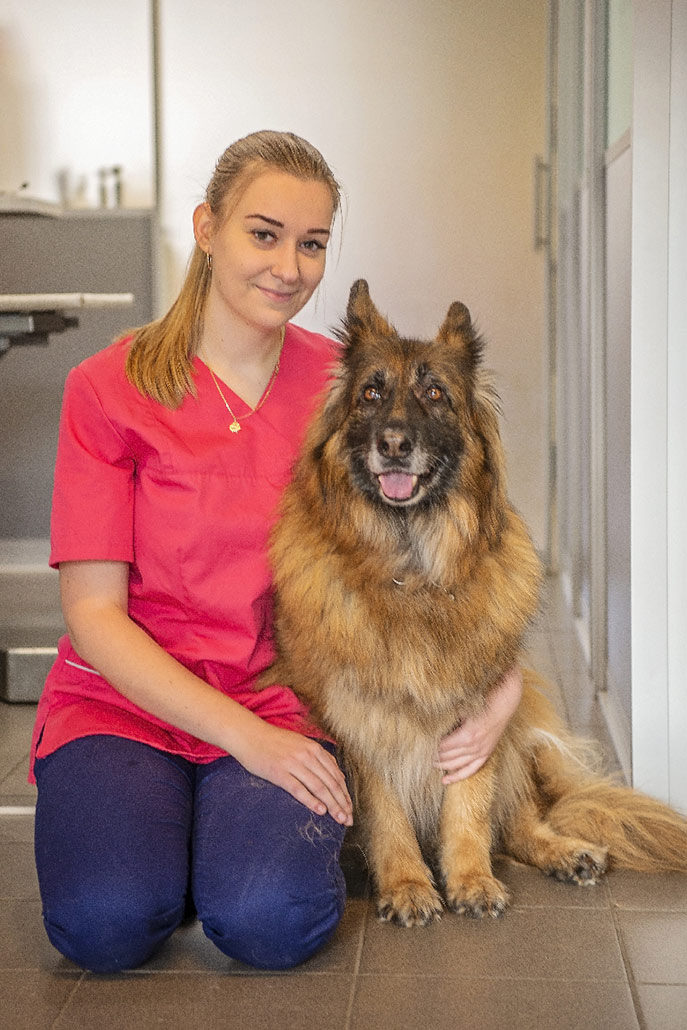 Kristiina has loved animals since childhood. Already in middle-school, she was sure that her future vocation would do something with animals. Through a happy coincidence, Kristiina came to work in our clinic as a receptionist. All through high-school she also worked for us when she had time left over from studying and after graduating she went to study as a veterinary assistant at the Järvamaa Vocational Education Centre.

Kristiina kas been an indispensable help both in the reception as well as puppy pre-school and she is also starting to get used to the responsibility of being an assistant in the veterinary side. She is interested in dog massage and physiotherapy and she hopes to continue her education in those fields in the future.

In her free time, Kristiina deals with her cat and thee dogs most of the time. With her younger dog, she goes to agility and is educating herself to become a dog trainer. And if she has time, she leaves the city for nature to walk about with her dogs. 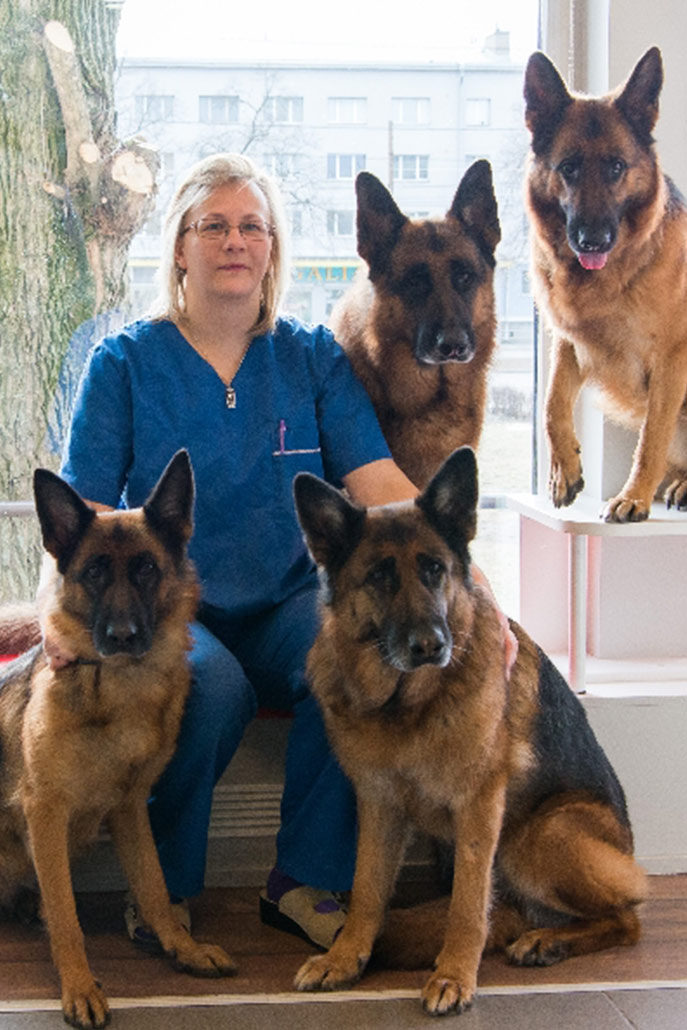 Piret came to us in August 1996 and immediately became an irreplaceable assistant, especially in surgery. As veterinary assistant education was non-existent in Estonia during those times, Piret manly continued her education in Finland, but also in the United Kingdom.

When opening a veterinary assistant’s education program in the Järvamaa Vocational Education Centre came up, Piret was called in to compile the curriculum. Therefore, we can say that to some degree, all veterinary assistants are studying and have studied under Piret’s instruction. Piret has been elected as an honorary member of the Estonian Veterinary Assistants Association.

Piret has 5 German Shepherds named Qukara, Tennu, Nacre, Taara and Pudi at home. Piret and her dogs also take part in search and rescue and they are members of the Volunteer Reserve Rescue Team. Therefore, if someone gets lost in the woods, they will also go out on the search.

Piret also likes to take part in dog shows, presenting her own dogs and others. If she has time left to spare from dealing with animals, Piret likes to read and take part in sports. 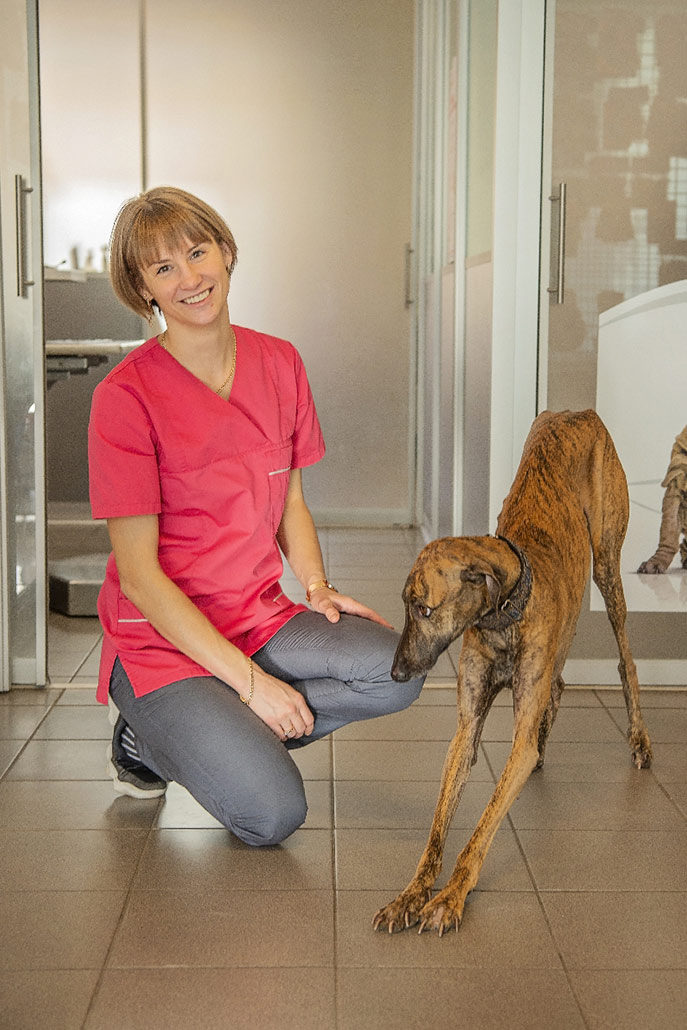 Teddy grew up in Pärnu county in a pine forest by the sea. She has also had many animals at home: rabbits, chickens, ducks, pigs, cats and dogs. The neighbours had horses, cows and sheep. Teddy often spent her summers at her grandmother’s fur farm. Her big love for animals comes from her childhood. When she was a teenager, guinea pigs, hamsters, rats, fish and lovebirds also became pets. Teddy stated working as a veterinary assistant in 2011 and since 2013 has been working in our clinic. She first started as a receptionist and after coming back from maternity leave, as the assistant in the veterinary side. In 2012 she started studying in Särevere at the Järvamaa Vocational Education Centre in the field of veterinary assistant, which she graduated in 2014.

In addition to animals, Teddy also has a big interest in law. In 2011, Teddy finished her social science bachelor’s studies in TalTech (TUT) and in 2013, she started studying her Master’s in law in Tallinn University, which she graduated from in 2017.

Teddy has a small son and Arabian Greyhound Öö at home.

Her hobbies include running marathons, skiing and reading. 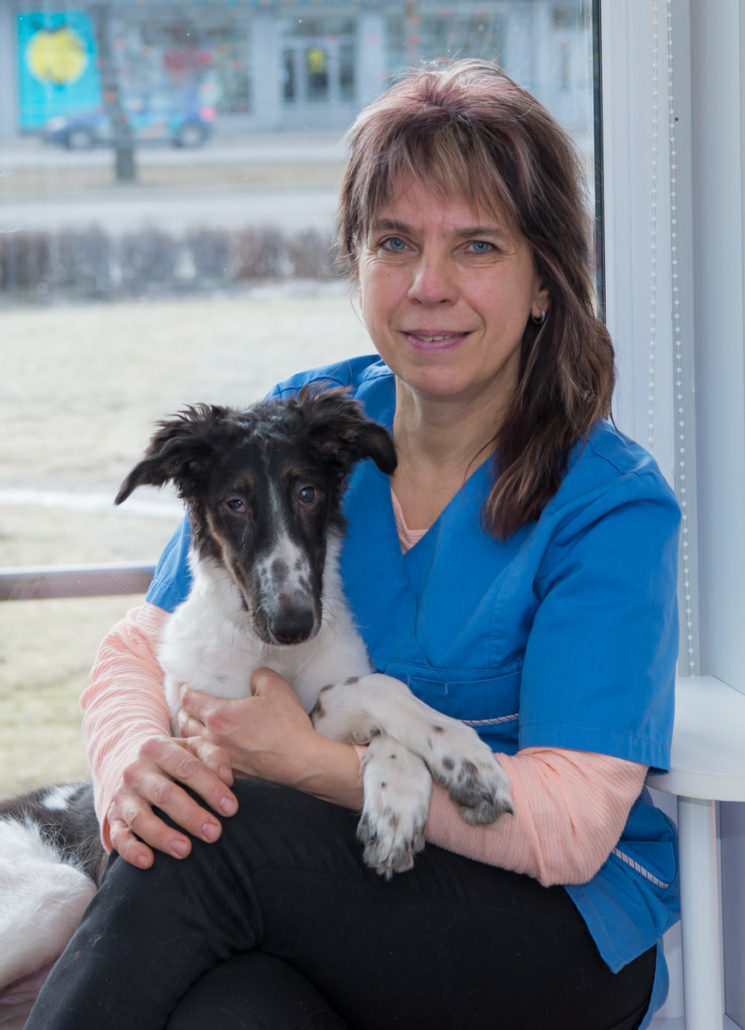 Thekla has been working at the clinic’s reception for years. She is a very good listener and adviser over the phone. If you can’t get help from Thekla on the phone you MUST take your pet to the doctor.

Thekla spends the bigger part of her day behind the computer, but if a really impossible dog comes into the clinic, Thekla steps out from behind the desk and „tames” him. She has some sort of magical effect on them. Fortunately, it’s seldom necessary.

Thekla has had dogs in her family her whole life, she was 20 when she got her first show dog. It was a black male Newfoundland called Roy, who was better trained than the German shepherds Thekla has now. Unfortunately, that dog was always last in shows. However, as Thekla was hopelessly infected with dog show fever and didn’t want to be last, another Newfoundland dog was taken in, who was always first in show. From that time onwards, her main concentration has been on dog shows.

Her third dog was without papers, flop-eared German Shepherd called Robi, who was given to Thekla by her husband. Robi was truly smart and trained and Robi sparked Thekla’s love for German Shepherds.

A Toy Poodle came into Thekla’s family, when she took her mother-in-law’s silver-grey Poodle puppy in for a few days.

Thekla has worked in many dog kennels in Finland, from there she got the courage and tips to open her own dog accommodation.

In her spare time, Thekla does grooming for dogs and cats and offers accommodation to all sorts of animals. She also gives advice on behaviour and training, attends a lot of dog shows and trains her own dogs.

Thekla has 4 Toy Poodles, 2 German Shepherds, a Borzoi and a cat at home.

If Thekla has some time to spare from dealing with her furry friends, she likes to go on canoeing trips and at least once a year she turns off her phone and takes some time off on a sandy beach somewhere.

Victoria has a degree in chemistry. She came to our clinic because of the great group of people. Viktoria works in the clinic’s reception and can give advice or information in three different languages. She knows everything about the pet foods, shampoos, flea and worm medicines that we sell in our clinic.

Viktoria was 6 years old when she got a Bolonka after relentless begging. Getting her next dog was not any easier. As Viktoria’s friend had a small brown Poodle, she also wanted one, but a big white one. When she had finally got her mother to agree to get a small Poodle, Victoria still bought a big Poodle and her mother had no choice but to accept the situation.

Viktoria has been grooming Poodles for years now. She started learning how to groom on her own dog.

Viktoria has three small black Poodles at home. During her free time, she like to do agility with her dogs and go to dog shows. In addition, she also likes to swim and ride a bicycle.

Silvia makes sure that our accounting and correspondence are fast and correct.

Warning: Unknown: Failed to write session data (files). Please verify that the current setting of session.save_path is correct (/data01/virt98805/tmp) in Unknown on line 0