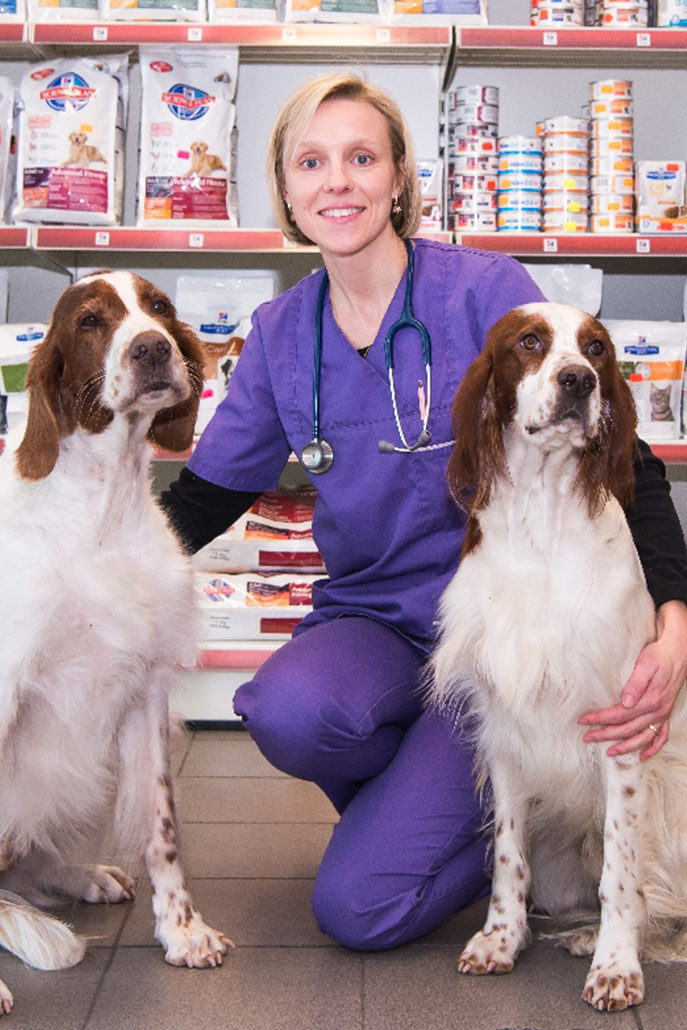 In many veterinarian’s lives there’s a story of a sick pet that sparked an interest in veterinary medicine. Angela Tiivel in one of those veterinarians. When she was 13 years old, her German Shepherd’s leg wound was treated in our clinic and from that moment on Angela decided to become a veterinarian.

Every free moment of her last high-school years Angela spent in our clinic and so her further education was decided – EPMÜ Veterinary Medicine Department, which she graduated in the spring of 2005.

Even during university Angela spent every weekend and all summer vacations in the clinic, at first just looking and helping a little, but later filling in for the assistants full-time.

Starting early has given Angela a lot of knowledge and courage to explore new grounds. Angela has continued her education at Helsinki University, Wylie Veterinary Clinic in England and gone through educational programs in Finland, Latvia and Lithuania etc.

Angela mostly deals with internal diseases and does surgery, she also deals extensively with hematology. Angela is also actively supplementing her knowledge in small-animal cardiology.

Angela has an Irish Red and White Setter named Hubert at home. 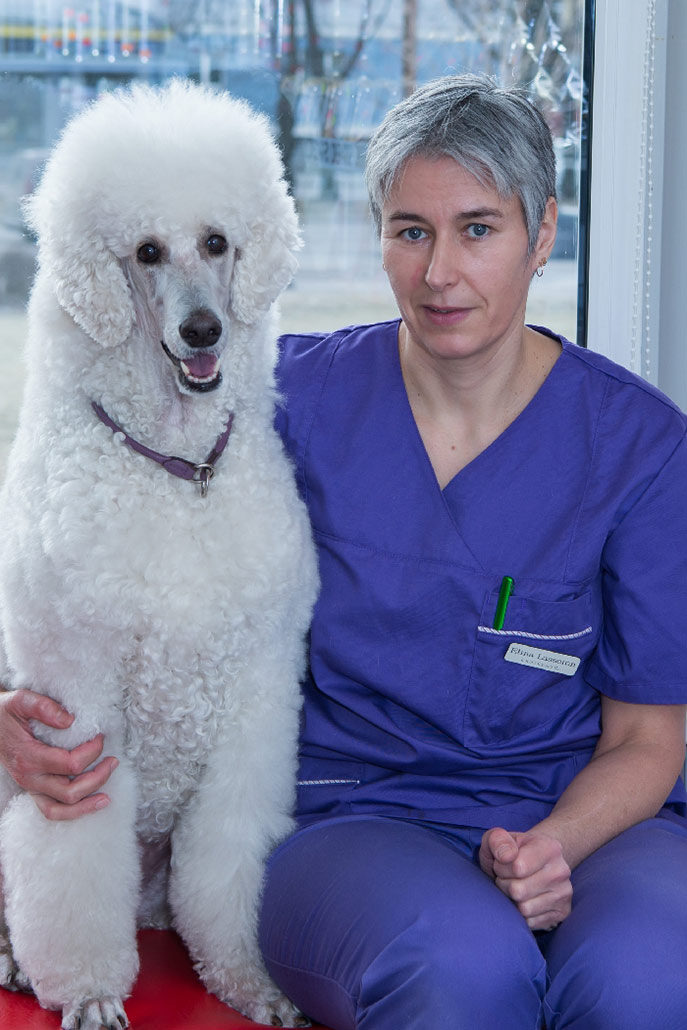 As a child Elina spent her summers in the countryside with her great-aunt working and dealing with animals. She liked to mimic their behaviour and once, when trying to be a cat Elina cut off her eyelashes with manicure scissors because cats do not have such long lashes.

Elina had to beg for a dog for a long time. Before getting one Elina and her grandmother, who was also very fond of animals used to feed all the dogs in her neighbourhood. Elina wanted to help all the stray dogs, so she brought them home and that didn’t please her parents, therefore by the age of 12 Elina got her very own dog. It was a big black female Poodle, because Poodles don’t shed hair. Her parents warned Elina that if she can’t handle the dog, it will get sent to her grandmother’s. However, she did manage and from then on Elina’s love for Poodles began and grew, as Elina has never owned any other breed of dog. At the moment she has two big white Poodles at home.

Already at the age of five or six, Elina wanted to become a veterinarian. Before heading off to university, she thought of studying biology, but she was afraid that she would be appointed to a position of a biology teacher and therefore decided on veterinary studies. She enrolled in EPA’s Veterinary Medicine Department in 1985 and after graduation started working at the National Veterinary Laboratory. In 1993 she came to work our clinic. 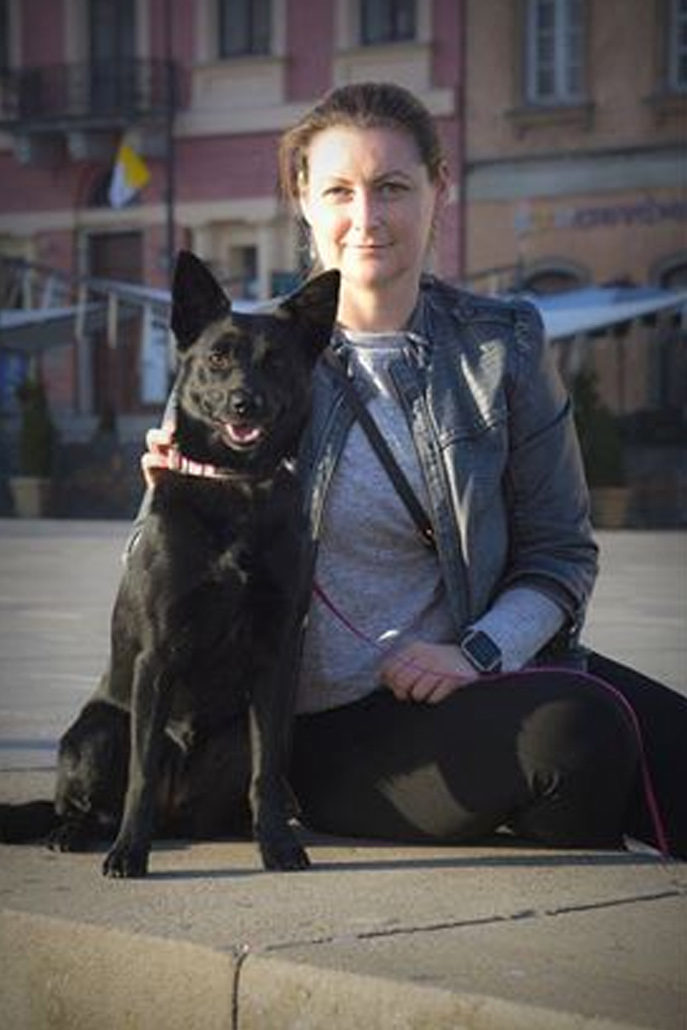 Inessa has always had animals in her home and she was always on good terms with them. Even with her grandmother’s dog, who was not fond of children, who allowed a 3-year-old Inessa to eat sausage out of its bowl. As Inessa’s father worked in the forest, many small animals and broken-winged birds came through their home and needed to be nursed back to health.

At school, Inessa’s favourite subject was biology and after graduating from high school, she enrolled in the EPMÜ Veterinary Medicine Department to become a veterinarian. During university she would spend all her free time and summer vacations at the university clinic or other clinics across Estonia. After finishing university, Inessa did her internship at the Estonian University of Life Sciences veterinary clinic, where she supplemented her education in the fields of surgery, internal diseases, orthopaedics and neurology. She has gone to many continuing education events regarding ultrasound and x-ray diagnostics in Estonia, Latvia and Lithuania.

Inessa has been working in our clinic since autumn 2007. At first she came from Tartu once a week to fill in for colleague Ingrid, who had gone to study in Finland. Now she has become indispensable, she has moved to Tallinn and works at our clinic full-time, mostly dealing doing dermatology. Inessa has supplemented her knowledge of dermatology in Finland, France, Poland, Croatia, Latvia and Lithuania.

At home Inessa keeps two Italian Greyhounds and a Kelpie, whom she traines in agility, fitness and a bit of obedience training. 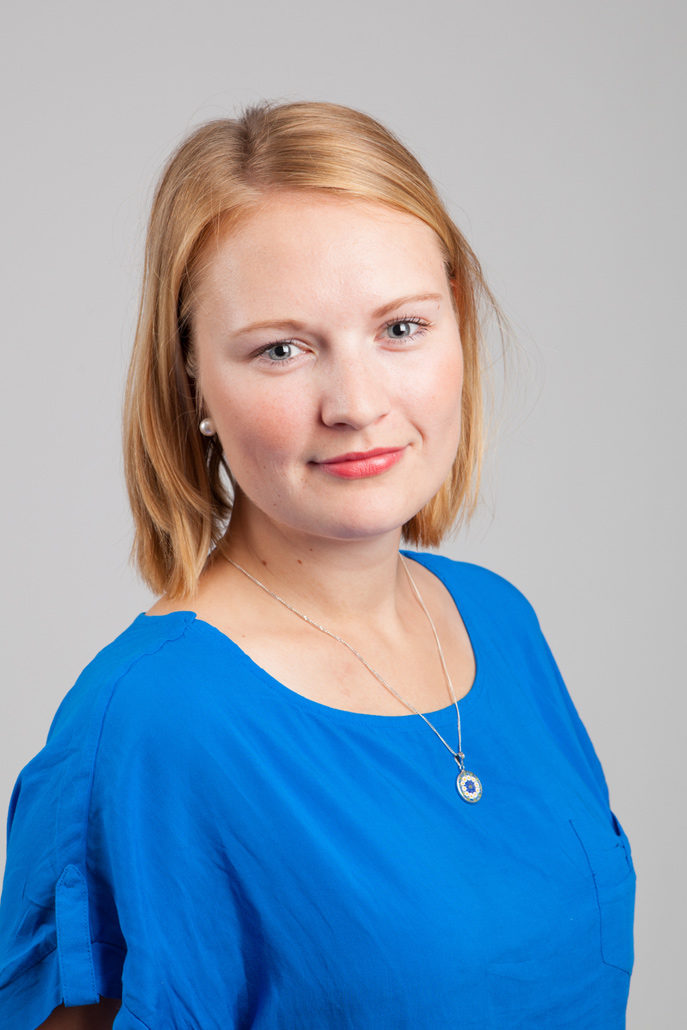 Kersti found veterinary medicine through a friend, who was already studying the profession. After some encouragement from him, Kersti decided to go to study in Tartu to become a veterinarian. Looking back, Kersti always had a fondness for animals. Her childhood summers were spent at the countryside with grandparents tending to sheep, pigs, chickens and the family wolfhound. Kersti thinks that’s where she got her love for animals.

After finishing her studies in the Estonian University of Life Sciences in the June of 2013, Kersti came to work as a doctor at Tiina Toomet Veterinary Clinic. Kersti started at the clinic when she was still a student – first as a trainee and then later on as an assistant. At the moment Kersti is working as a general practitioner and hasn’t specialized as of yet. Kersti is mostly interested in internal diseases, dermatology and weight issues of dogs and cats.

At home Kersti has a cat named Karl, who came to our clinic as a lost kitten and who then became her pet.

At the moment Kersti is on maternity leave. 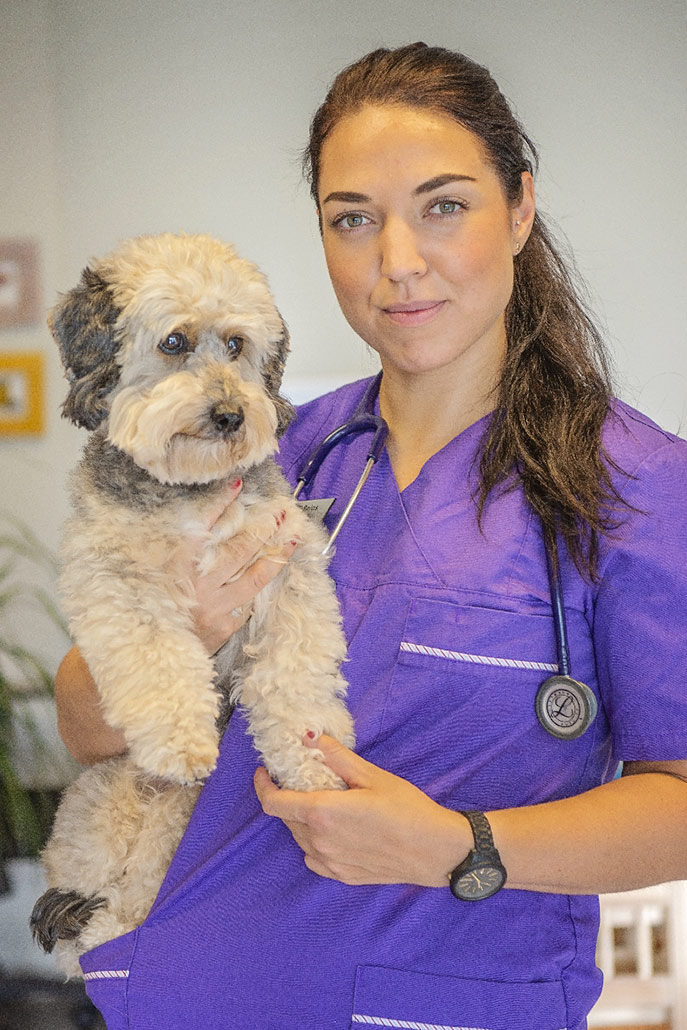 Sirli has always known that she wanted to work with nature and animals. She says, that animals are so sincere and honest, that working with them is a bit like therapy. In addition, pet owners always have such lovely and funny stories about their pets. To see, how big a role pets have in the lives of their owners, is wonderful.

Sirli graduated Estonian University of Life Sciences in the field of veterinary medicine in 2013. She studied a year in Spain and has worked in Estonia, Finland and Australia in both regular and emergency clinics (24h). Sirli came to help us out in the summer of 2018, when everyone wanted to go to the FECAVA Congress and we almost had to close the clinic for that time. Summer has suddenly become winter and Sirli has become such a natural part of the clinic like she has worked here for years. At the moment she is working as a so-called general practitioner and is still searching for a field, which would hold enough interest to start complementing her knowledge of it more thoroughly.

Sirli has a small Jack Russell Terrier called Lumi (Snow) at home. She spends her free time happily in nature and says that she cannot live without exercise (skiing, snowboarding, running, diving), she loves reading and capturing beautiful people or moments on film. 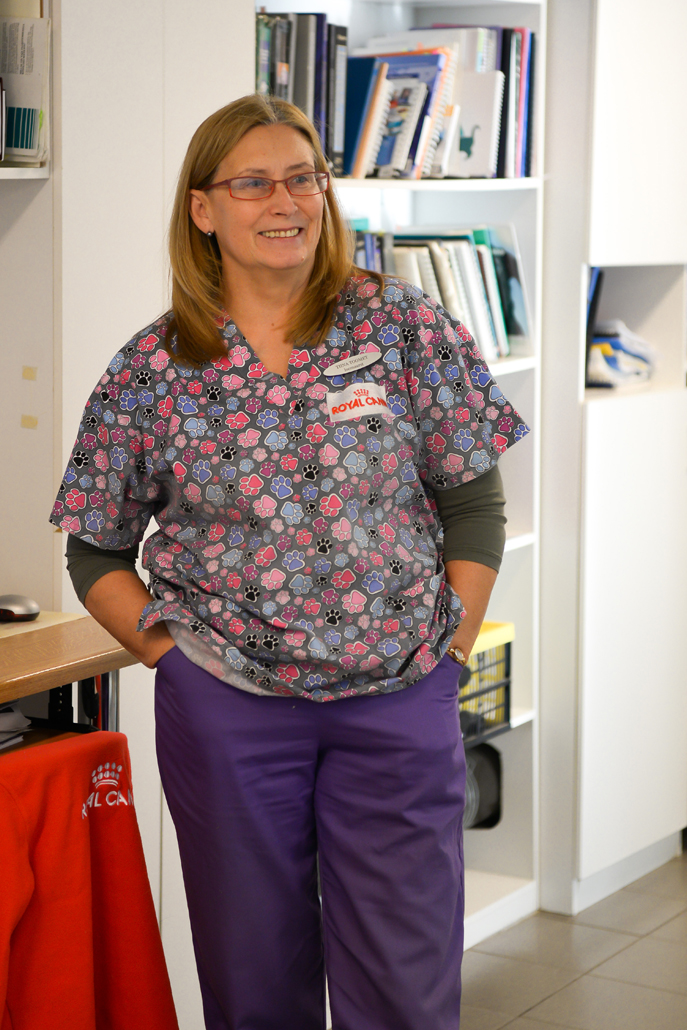 Tiina decided to become a veterinarian in the third grade, when the family poodle died of distemper. Before that, another poodle puppy died of intoxication. At that time there wasn’t any proper veterinary help available in Tallinn, and Tiina thought that when she was all grown up, she would be the doctor of all sick dogs in Tallinn. At one point she also wanted to become a veterinarian in a collective farm because when she was a teenager and going to the country, she was always sitting in the barn or wandering about the fields.

Tiina graduated EPA Veterinary Medicine Department in 1983 and although she had a position guaranteed in the only veterinary clinic in Tallinn on Västriku street, the government decided that agriculture was more important than cats and dogs and demanded her to choose between a collective farm and a laboratory. Tiina worked in a veterinary laboratory until 1986 and then stayed at home with her children for six years, not having the slightest idea what to do in the future.

In the dawn of private enterprises Tiina started going to Finland very diligently, continuing her education. She was hoping that an entrepreneurial colleague would start up his/her own practice, where she could go to work. In the end though she had to start her own clinic in 1991.

Tiina has continued her education mainly in Finland, but she has also attended almost every European and World Congress since 1995. She was the president of Estonian Small Animal Veterinary Association from its founding since 1994 to 2003. She was also the Estonian representative in FECAVA and WSAVA from 1996 until 2009.

Tiina’s main area of expertise is dermatology, ear diseases and allergies. In 2012, she started the puppy pre-school program on the encouragement from her good friend and colleague dr. Kersti Seksel, which back then was quite an innovative undertaking (following dr. Seksel Puppy Preschool method).

Tiina has always had dogs in her home. Beginning with the miniature pincher Peppi, who used to bite the heel of a two-year-old Tiina relentlessly and ending with Boston terriers.

Tiina says that she has no hobbies and past interest in handicraft has faded away because of limited time. Because of pressure from her three children, the former sports hater has become an avid mountain skier, she also likes to travel. In recent years, there has been more time to delve into books as well. 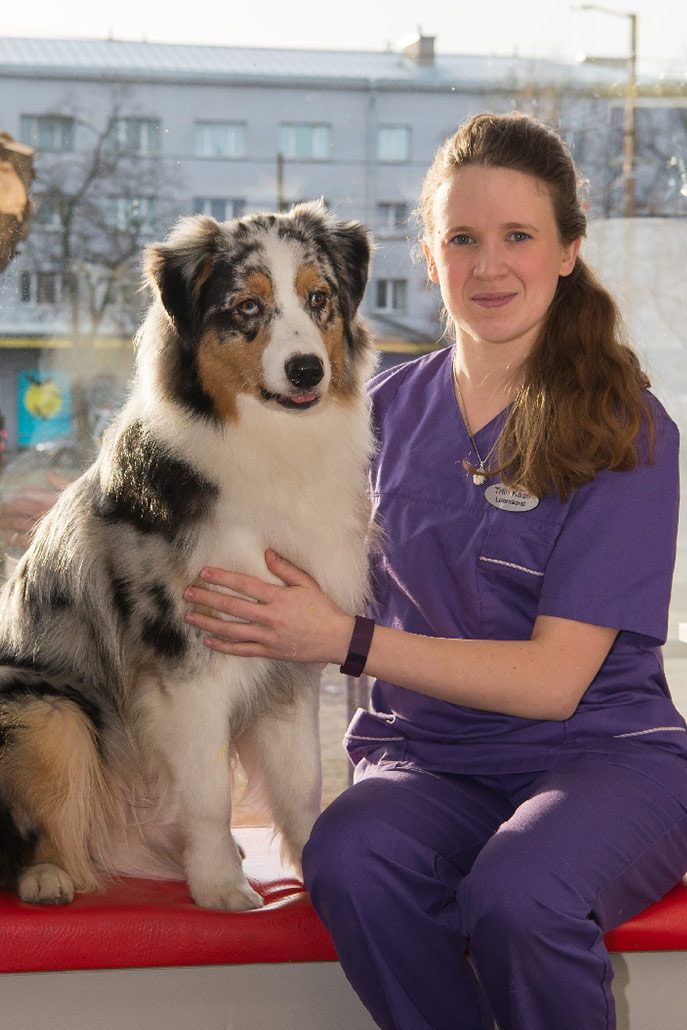 The desire to become a veterinarian sprouted early in Triin – all her friends and acquaintances knew she wanted to be a veterinarian.  She has no idea, where such a strong and certain job choice emerged from. The first pet Triin had was a hamster, after that a guinea pig and by the time Triin was 12-years-old her mother gave up and Triin’s biggest dream came true. The family got a dog. Quite a few children and youth camps were cancelled, because Triin was taking care of her dog.

Triin graduated Estonian University of Life Sciences in 2016 and started working in our clinic. During her studies she worked as a trainee in many small animal veterinary clinics. At the moment she is working as a general practitioner and conducts puppy preschool with Dr. Toomet. As Triin is still not clear which field to specialize in, she has gone to different continuing education events in Estonia, Romania, Holland. She has special interest in internal disease, infectious diseases and animal behaviour.

Triin does the thankworthy job of educating pet owners by writing articles for “Maakodu” newspaper.

During her free time Triin likes to sport. She especially likes sporting fields, which have to do with boards: in the summer wakeboarding and skateboarding, in the winter snowboarding. She also enjoys being in nature, so any trip she takes is traditionally to a ski resort or hiking trail.

When she was little, Ülle wanted to go live at the countryside with her grandmother because she had many animals. She also secretly dreamed of becoming a marine biologist in the far south. Unfortunately our polity at that time didn’t allow for such an occupation.

After the end of university, Ülle worked in Järvamaa with large animals, she did not have much contact with small animals. Her next job was working in a lab, where she met Tiina Toomet and a year later in the winter of 1993, she started working at the Tiina Toomet Veterinary Clinic.

Ülle got her first dog, a red longhaired collie, in 8th grade after a long time of begging. She wanted a collie because Ülle was fascinated by the dog described in the book „Lassie Come-Home“. She especially liked that Lassie was so obedient, what she looked like didn’t really matter much at that point.

When Ülle finished university, the urge to get a collie was so big that the young doctor bought a new companion – a blue-merle Dafi – with the money she got for her grandmother’s rug. Ülle is still true to collies, right now she has one called Roosi.

The internest in eye diseases sprung in Ülle when her own dog was diagnosed with CEA (Collie Eye Anomaly). Unfortunately it was not tought in schools and there was no one in Estonia who you could ask about it.

Ülle has studied eye diseases in Sweden and Finland. She regularly attends the Northern Veterinary Opthalmologists Conferences and ECVO Congresses. She has continued her education in England, USA, Italy, Thailand and ohter countries.